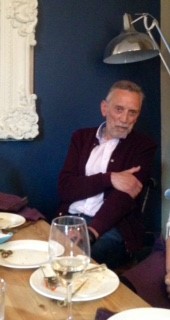 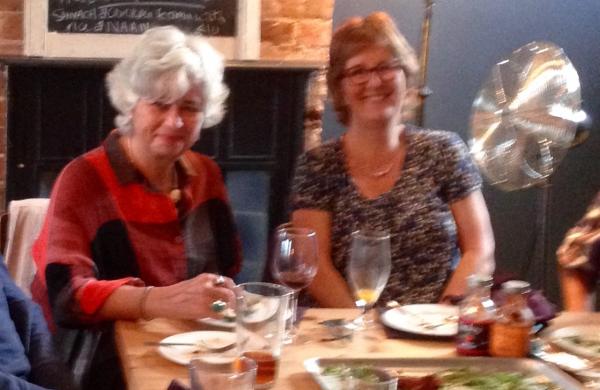 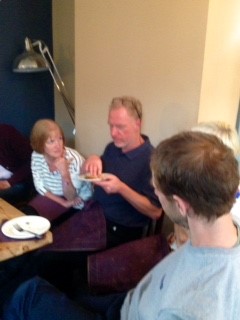 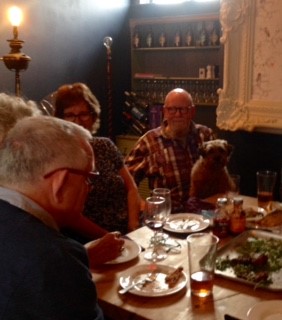 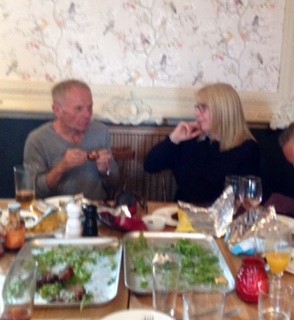 Kicked off the holiday with Redan Street friends upstairs at the Arb. Sarah and Peter generously provided two platters of fantastic grub.  Mary Phibbs couldn't come so we had a farewell glass with her on the Saturday.  A big thank you to all.

Arrived safely.  Emerged from the Tunnel to the sight of miles of barbed-wire fences and a small group of black migrants making their way along the central reservation on the busy Paris-Calais motorway.

A few days of exploring battlefields and memorials.  We began at Agincourt  in chilly mist but were soon sunning ourselves in the Somme valley.  Have visited the most famous memorials here  and some little local ones too which 'only' commemorate a thousand or so young men.  We were, at the end of three days, in the lucky position of being able to leave the Great War behind us. Off to gay Paree.

Paris was exciting - but could only take a morning of it.  By train and metro we visited the first house that le Corbusier designed in Paris, the Statue of Liberty, the Eiffel Tower and la Grande Arche at la Defense.

How Parisian is that!

The first house le Corbusier designed in Paris - all straight lines and curves with colours to emphasise the shapes.

From our first view of the cathedral in the distance as we tanked down the N10, we could see it was magnificent and special.  And so it proved to be - the portals, statuary, stained glass, its age and size and the colourful light inside.

An overwhelmingly joyful afternoon, even though soldiers were on duty, automatic guns at the ready. (Chartres cathedral)

Hang on a minute - large flat wheatfields, sugar beet, watertowers.  Are we back on the Shotley peninsula?  No - It's la Beauce - famous for being flat and fertile (and boring in an interesting way if you're only passing through).

Camping next to a Sylvanian-style castle, we rode our bikes up and down the Loire in the sun.  Yes, this was the place where we came across some doggers! (Sully sur Loire)

Torrential rain, thunder, mist and mountains for what seemed like days and days.  Between the downpours, we visited some great places but the overarching theme was wet, wet, wet.  No electricity for some nights.  Looking at the short and medium range weather forecasts, we made a quick exit from the mountains, planning to make our way to Provence to dry out and warm up.

Paul prepares to cook scones on a wet Monday afternoon in the mountains.

A gorgeous campsite - lush vegetation, swimming pool and the sun is out for this weekend only. Adjacent motorway noisy but who cares.

Squid stuffed with spicy sausage in a strong fishy sauce bought this morning at Pezenas market for our tea.  I think I might stick to cheese on toast tonight.

My holiday dress - £8 off the market this morning

Hardly a splash at all. (Pezenas campsite pool)

Technical report at the three week stage of the trip

Garmin GPS abandonned.  Emily, the GPS voice, is a dozy tart.  Using iPhone over a bluetooth speaker which keeps falling off the dashboard.

Plumbing needs dose of salts to clear it out.

Otherwise, all systems good (except the weather).

But an unexpected bonus at this wonderful place - Paul could have a swim.

Van Gogh was in an asylum here and painted some of his most famous paintings around about e.g. starry, starry night.  Nostradamus was born here.  But the best thing was an archaeological site inhabited by Gauls and Romans for centuries.  Apparently, the mega-rich and super-chic come to this town but why?  Nice enough but so what?

Sanary-sur-Mer, Provence
Here we are on the Cote d'Azur  but, sadly, in the rain - the campsite paths have turned into rivers and the electricity is off.  This is the furthest flung place on our trip (about 900 miles away from Ipswich by Googlemap).  Interestingly, we learned that a number of German and Austrian intellectuals lived here in the 1930s to get away from Nazism - Brecht, Koestler, Thoms Mann - and we visited some of the houses and cafes associated with them.

Came here via the tunnels of Marseille so just saw the outskirts and the harbour with ferries for Corsica lined up.  Stayed in Fontvielle for several nights an aire with the best chemical toilet disposal facilities in France.  One of our favourite overnight places. 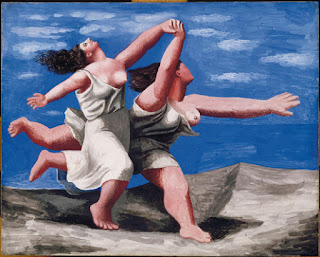 An amazing installation - Picasso's paintings projected over the walls and ceiling of an abandonned quarry, all to a great sound track of music. (Les Baux)

Another rainy Monday, but this time in posh wine country

We found Mary's brother's house in Mirabel aux Baronnie,a  lovely old hill-top village. We are in an aire down by the bins and electricity sub-station.  Moved on up the road to Nyons for three nights   We witnessed a major rescue in Nyons: teenage girls got swept away in the strong current of the swollen rivers and one had to save herself by clinging to plants just by the Roman bridge.  Took the rescue services over 2 hours to get them to safety.  Was in the local papers and we saw it all.

Here I'm striking my French philosopher's pose as I rest against a chapel door.  The reality was I had just done a  'family walk of medium difficulty' that nearly killed me.  Thank God Paul found me a stout stick for the descent.

We climbed the highest castle keep in France.  Amazing views from the top.  Less attractive are the campsites - perfectly nice and pleasant but full of people our age who stare and don't smile or say hello except to their fellow countrypeople.  (Crest, le Drome)

Our last stop in this beautiful departement was at Tain l'Hermitage on the Rhone.  It's a noisy campsite in a noisy town.  Big news here - I had my legs waxed en francais.  We also did a monumental bike ride along the river- 25 miles in high heat along the river to Valence and back.  My electric bike ran me over while Paul was on the phone to Joyce Dumper so I have a magnificent bruised (but unhairy) right leg - no photo available.

Watched World Cup match - France v Peru - in a crowded caff.  Good fun and probably the first time we have ever watched a whole football match on telly.  We have now run out of steam.  Rather homesick and with a faulty gearbox, we have decided to come home.

Last night of the holiday spent in a tiny, crowded aire.  Paul, in particular, just needs to be back in Suffolk and away from the madding and maddening crowd.

Magnificent squares in the Flemish style in the middle of town.  Perfect for a beer.

Home sweet home.  What a trip!